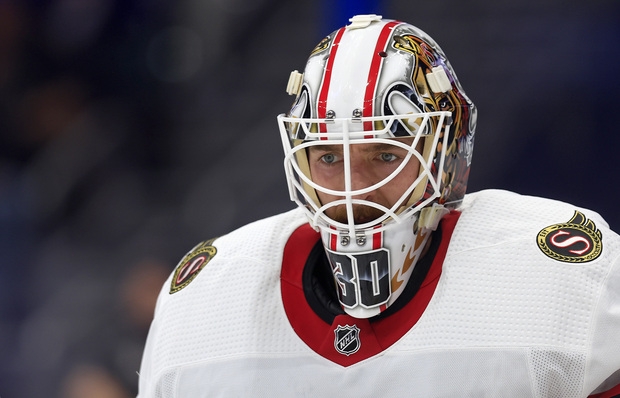 Will Matt Murray be suiting up for the enemy in the Battle of Ontario next season?

While all was quiet on the Ottawa Senators’ front on the weekend after general manager Pierre Dorion pulled off a huge deal for two-time 40-goal scorer Alex DeBrincat before the NHL draft Thursday, there was a lot of work being done behind the scenes.

The Toronto Maple Leafs have emerged as the frontrunner in a deal for Murray. Hockey Night in Canada‘s Elliotte Friedman reported Sunday “talks have intensified” between the Leafs and Senators this weekend.

There has also been discussions with the Edmonton Oilers, Washington Capitals and the Arizona Coyotes among others, but Leafs general manager Kyle Dubas and coach Sheldon Keefe have a history with Murray from their days together with the OHL’s Sault Ste. Marie Greyhounds.

Murray, who has two years left with a cap hit of $6.25 million per season, is at the forefront of the talks between Ottawa and Toronto. The NHL goalie market is shrinking and TSN’s Darren Dreger reported Sunday the Leafs aren’t close to a contract extension with starter Jack Campbell.

As we noted in this space Saturday, Dorion and his hockey operations staff left the Bell Centre on Friday with a priority of trying to get Murray moved and acquiring a right-shot defenceman.

There was a buzz at the Bell Centre that a deal may get completed to send Murray to the Leafs before the draft ended. There was talk circulating that Toronto wanted to take a closer look at Murray’s medical records before signing off on a trade.

Murray had a concussion to finish the year and wasn’t cleared to play at the IIHF world championship in May. He has been at the Canadian Tire Centre most days working out during the off-season and is scheduled to resume skating next week.

Dorion certainly didn’t sound like he had any concerns about Murray’s health while meeting with the local media in Montreal for the draft.

“Matt is doing great,” Dorion said. “He pushed hard at the end of the year to play for us and (for Team Canada) at the world championship. We decided as an organization, he just needs to get healthy for next year. I’ve been at the rink most days for the last month and he’s been there.

“He’s been working out, he hasn’t been on the ice but he’s going to do that next week. We’re expecting a full recovery for him.”

All this talk came in the wake of Murray saying no to a trade to Buffalo last Tuesday. He refused to waive his no-movement clause to join the Sabres. That deal would have sent Murray to Buffalo with the No. 7 overall pick in exchange for the Sabres’ No. 16 selection.

The club then would have packed up No. 16 to get DeBrincat.

There has been speculation on social media that if the deal does happen there’s a chance right-shot defenceman Justin Holl comes back to Ottawa in the trade. He has one year left at $2 million but it’s not known if Holl has even been discussed.

There have been suggestions the Senators might buy out Murray’s contract, but that doesn’t seem realistic. There’s a mere $5 million in savings and, if he were to return to camp and is unable to get the job done, he could be sent to the American Hockey League affiliate in Belleville.

Troubled by injuries and inconsistency, Murray would likely rather stay with the Senators, but he’s the odd man out. Anton Forsberg is the No. 1 and Filip Gustavsson is also signed to a one-way deal for next season to be the backup.

Say what you want about Murray’s play, he’s still a two-time Stanley Cup champion and could be worth the risk for a contender like the Leafs.

Murray was going through a good stretch in the net when he was injured during a March 4 game against the Coyotes. If healthy, he can still be a top NHL goalie because we’ve seen it at times with the Senators.

Why wouldn’t Ottawa keep him, if that’s the case? It’s because getting that salary off the books would give Dorion flexibility to make other moves and Murray just hasn’t worked out in Ottawa so a fresh start may help.

The Senators won’t spend to the NHL’s $82.5-million US salary cap next season, but they still have to get four restricted free agents re-signed before camp in September. That includes centre Josh Norris, wingers Mathieu Joseph and Alex Formenton, plus defenceman Erik Brannstrom.

If Murray is dealt, it wouldn’t be a surprise if the Senators explored the goalie market for a trade or free agency. Forsberg is tabbed as the starter going into camp, but it might make sense to bring someone in who can push Gustavsson for the backup role.