When we arrived in Morocco, we did not know Ouarzazate, much less imagined that it would be the city we would like the most. The Hollywood of Africa (although American and European films are filmed) and the Gateway to the Desert, that’s Ouarzazate. It’s promising!

But let’s start at the beginning. We arrived in Fez with the intention of going north, although as it was going to rain every day, we decided to head south. We were so eager to see the Sahara that we didn’t care in the least. However, we had to reorganize the route. So we knew that to go to the desert it is better to do it from Fez and that on the way to Marrakech we should reserve at least two days to visit Ouarzazate.

The first thing that amazed me was that real jewels like Star Wars, Lawrence of Arabia, Gladiator, The Mummy and The Jewel of the Nile had been shot there. And pay attention, Game of Thrones fans, here you will find the city that Daenerys Targaryen liberates in the last chapter of season three, when thousands of slaves come out calling her mother.

Ouarzazate is in a unique location. At the foot of the Atlas Mountains and a few kilometres from the desert, here you can shoot in high mountain landscapes, snowy peaks, vast palm groves, vast and arid plains, spectacular dunes and refreshing oases with lakes and lush valleys. It hardly rains and the light is exceptional – a paradise for any director! So we were not surprised when they told us that most of the population lives from the cinema and that almost all the inhabitants of Ouarzazate have appeared in some film. Who would not want to be released by a Targaryen?

What to see and visit in the city of Ouarzazate?

Whether you are a film fan or not, while you are in Ouarzazate, you cannot miss these architectural wonders that have been the setting for many famous films over the past 50 years.

It is a thousand-year-old fortified city that UNESCO declared a World Heritage Site in 1987. AïtBenhaddou is located about 30 km from the center of Ouarzazate in the direction of Marrakech. Ideally you should go by car, this will give you more freedom to explore the area, but it is also easily accessible by taxi. The price includes the return trip and the waiting time. It cost us the whole taxi for two 250 dirhams (about 25 euros). But remember that in Morocco everything is negotiated, do not stay with the first price they ask you (it will be high). And keep in mind that you will need a big taxi, these can be shared and so the price of the journey is shared among all.

The best thing you can do is walk around the city to admire the traditional adobe architecture (sand, clay, water and sometimes organic material such as straw or manure). The citadel is small and not very mysterious: it is a few narrow cobbled streets that go up to the top of the fortification. From here you have a spectacular view of the Souss-Massa-Drâa area and the Ounila river.

The visit to the interior of Aït Ben Haddou is free (you will have to enter by the new bridge, if you do it by crossing the riverbed they will want to charge you the entrance fee) and you can do it by yourself. You won’t need a guide, although they will most likely offer themselves at the entrance (don’t stay with a group if you want to go on your own and if you want to go with a guide don’t pay more than 50 dirhams per head).

And to complete the visit, I recommend that you visit one of their Kasbahs (houses). Although it is mostly uninhabited, there are still about 8 families living there. They will probably offer it to you themselves, but if they don’t, don’t be afraid to ask. The price is usually between 10-20 dirhams.

Although not as impressive as the previous one, this kasbah is located in the same city of Ouarzazate, so you can get there on foot or by petit taxi (it’s a 20 minute walk down the main street so you can’t miss it).

Decide beforehand if you want a guided tour or if you prefer to go on your own as at the entrance they will want you to join a tour. As always in Morocco, you will not be told that you have to pay them until the end. But it’s common sense, nobody works for the love of art. To avoid misunderstandings, negotiate before starting the tour.

That way, after paying the entrance fee (20 dirhams, about 2 euros) you can start to get lost in their passages. Inside the kasbah you will find a labyrinth of irregularly sized rooms with dozens of stairs leading to even more mysterious rooms and spaces illuminated by low windows. But the best part is when you reach rooms decorated with carved wooden ceilings or large hand-carved windows.

We were a little disappointed when we learned that access to the towers remains closed for security, but we were still able to enjoy the views through the windows.

And when you’re done, be sure to visit the small medina at the back of the kasbah.

The Atlas Studios or Atlas Corporation Studios are film studios located 5 kilometers from Ouarzazate, in the direction of Marrakech. If you are a film buff, you can’t miss them. Although it is always advisable to enter to know the details of the scenery of big productions like Gladiator, Asterix and Obelix: Cleopatra’s mission, Prince of Persia: The sands of time or scenes from the already mentioned Game of Thrones series.

The ticket costs 50 dirhams (about 5 euros) and must be bought at the reception of the hotel Oscar, within the complex of the Atlas Studios. This time you will be accompanied by a guide as it is included in the price of the visit. However, the tour is in English. The timetable is from 8:15 to 17:15 if you go between October and February and the rest of the year it is until 18:45.

As I said a bit above, Ouarzazate is still off the beaten track. Except for the KsarAïtBenhaddou, an obligatory stop in all the excursions to the desert contracted from Marrakech, and the Taourirtkasbah which also receives a high number of tourists, in the centre of the city there is an atmosphere, as I usually say, more ‘authentic’ (not that the places that receive tourists are not, but we all know that reality is disguised a little to the consumer’s taste).

The centre of the city is quite small and can easily be covered in an hour, although if you want to savour the atmosphere, you’ll have to spend more time there. The epicenter is the Al Mouahidine square, a pretty busy place full of cafes, restaurants and small shops.

From here you can start walking around the market. This is a non-tourist souk and you will soon realise that everything for sale is specially designed to meet the needs of the city’s inhabitants. 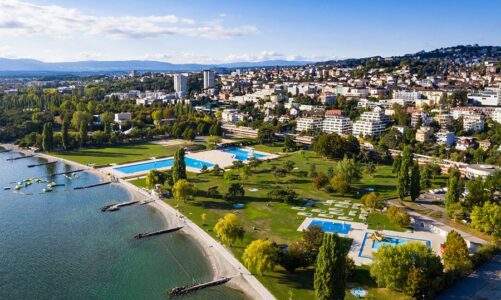