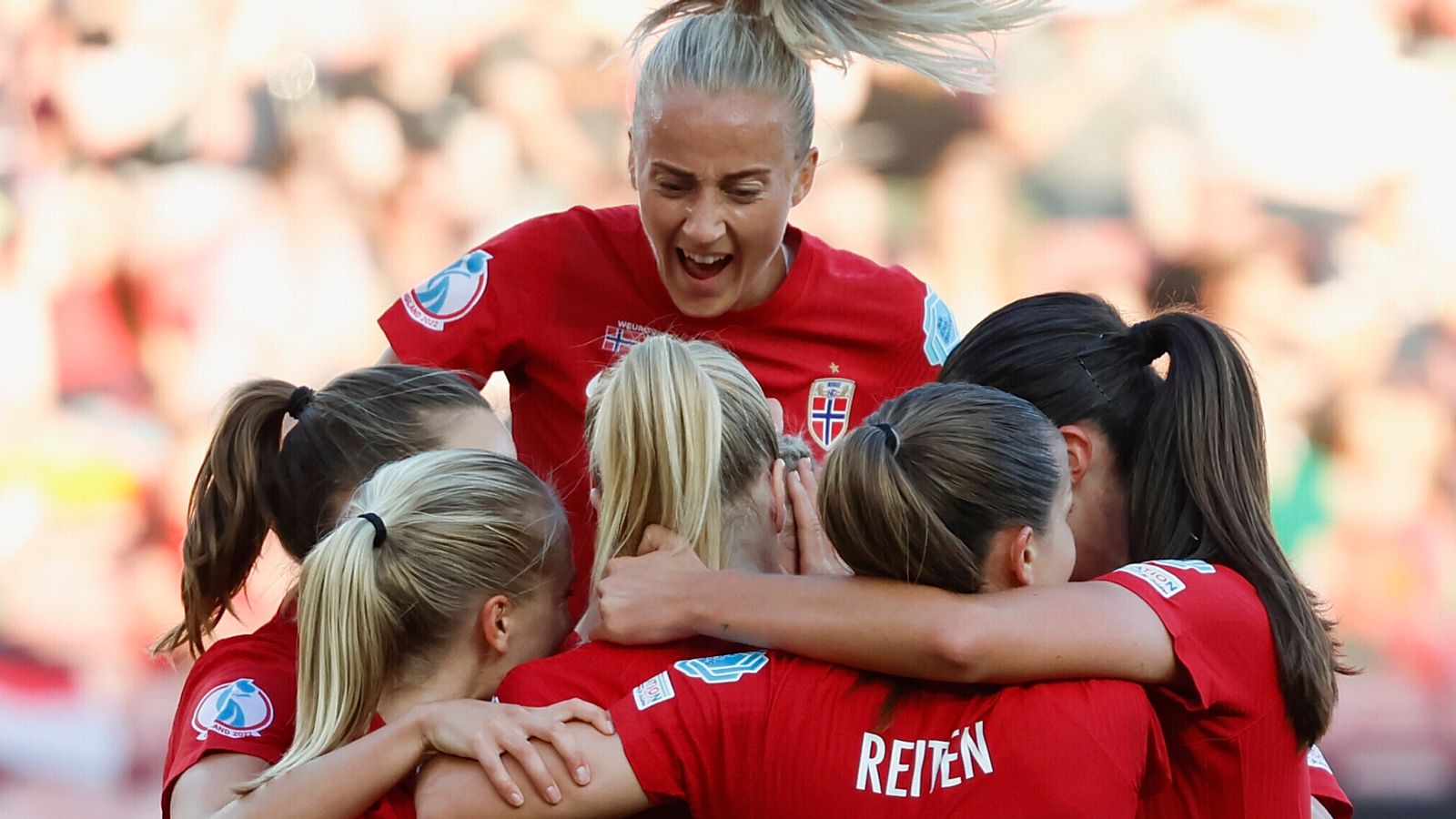 When Norway’s players landed in England on July 3, they weren’t really being spoken about as one of the teams to potentially win Euro 2022. After a resounding win against Northern Ireland in their opening group game, that’s beginning to change.

At the head of the pack is the first-ever Ballon d’Or winner and top scorer in Champions League history – Ada Hegerberg.

“It’s a very, very big game for the group stage,” the Lyon striker told Sky Sports News before their huge Group A match against England.

“Obviously, playing at their home grounds in a packed stadium is the moment we play for. We are going to enjoy it.”

Hegerberg apologised during our interview for speaking in cliches, stating they have to ‘take every game as they come’ but let out a rye smile when discussing whether she’s hoping to ruin England fans’ summer.

The forward returned from a 20-month injury lay-off back in October and one way through it was to set herself various short-term and long-term aims.

The short-term objectives were various based around fitness, the long-term aim was playing at the highest level with Lyon again. She more than achieved that by starring in the French giants’ Champions League campaign, scoring in the final.

Hegerberg is always quick to speak about the abilities of her international teammates, especially Barcelona attacker Caroline Graham Hansen who she calls “truly world class”.

The pair’s friendship had to be put on hold during the build-up to May’s Champions League final, the usual text chats were brought to a halt.

But now they’re reunited, much to the pleasure of Hegerberg.

“Now the season’s over it’s interesting because… Boom! We’re back together, we do all we can do to be at our best together and be the best for Norway.”

As well as being one of the most talented players in the competition, Graham Hansen is a serial winner.

Add to that back-to-back Women’s Super League champions Guro Reiten and Maran Mjelde from Chelsea, Arsenal midfielder Frida Maanum and potential breakout star Julie Blakstad from Manchester City. Norway really do have one of the most accomplished starting XIs at the tournament.

Almost all of the players mentioned so far had an influential impact during Norway’s opening Euro 2022 victory against Northern Ireland. Blackstad, Maanum, Hansen and Reiten scored the goals.

Reiten assisted the opener, while it took under 13 minutes for Hegerberg to have a hand in a goal on her return to a major international tournament, often playing unselfish passes for her teammates to shine.

It was a warning to the other teams in Group A and beyond – we are here to play. As 2019 World Cup quarter-finalists, they are aiming for another crack at the knockout rounds. 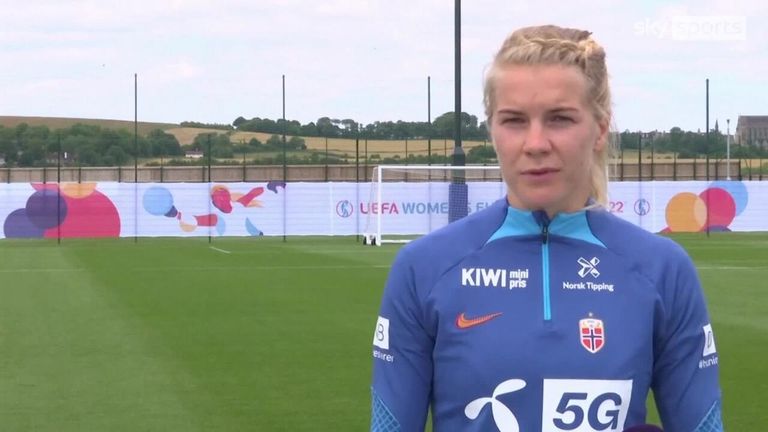 Norway striker and 2018 Ballon d’Or winner, Ada Hegerberg believes her country could achieve something special at the Women’s Euros this summer

Beating the team the majority of the 30,000 fans have come to cheer in Brighton on Monday night will be certainly one way to do it.

If that happens, Norway will be underdogs no more.

Keep up with all the latest from Euro 2022 across Sky Sports and Sky Sports News this summer.

Coverage will be anchored by Sky Sports WSL presenter Caroline Barker, alongside Jessica Creighton and Kyle Walker. Meanwhile, Karen Carney, Sue Smith, Courtney Sweetman-Kirk and Laura Bassett will give analysis throughout the tournament.

The pundits and presenters will work from the Sky Sports Women’s Euro 2022 Mobile Presentation Bus, which will follow the Sky Sports News team around the country to the various stadiums where matches are being played.

In addition, Sky Sports’ Essential Football Podcast will be rebranded for the tournament to Sky Sports Women’s Euros Podcast from 21 June. Hosted by Charlotte Marsh and Anton Toloui, it will feature exclusive news and player interviews in addition to a strong programme line-up around the tournament. 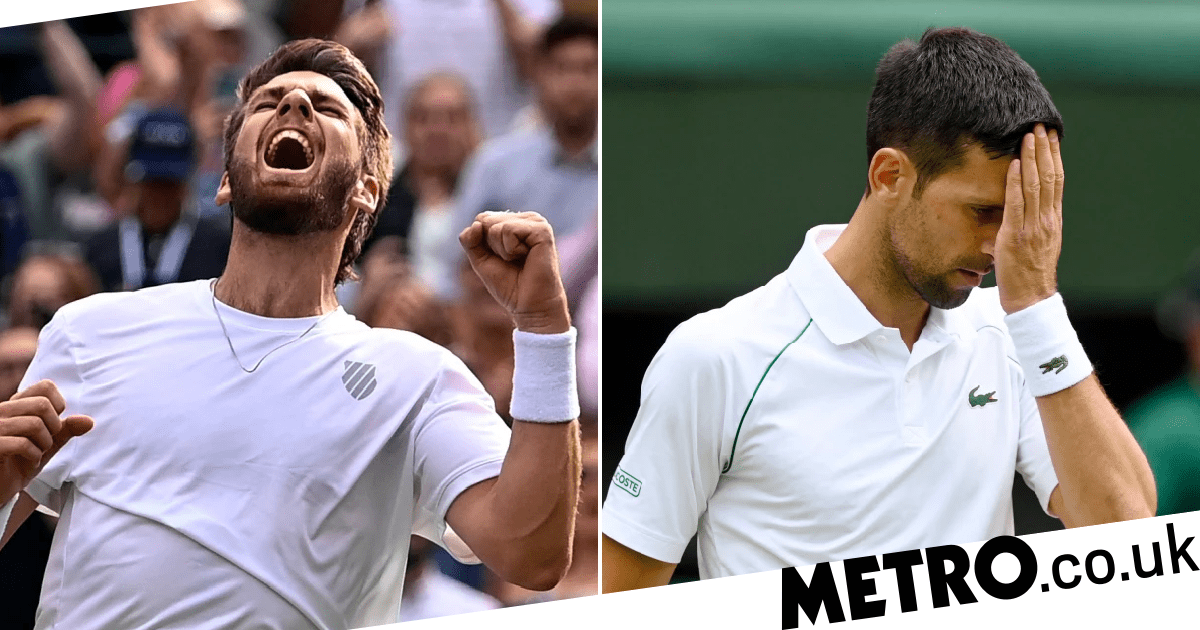