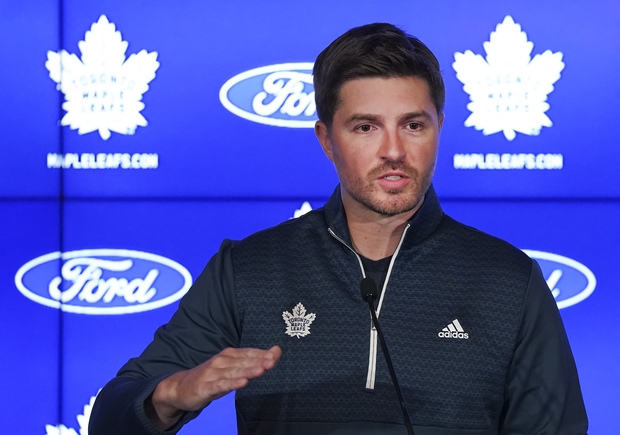 With the kind of financial gymnastics Kyle Dubas has to navigate to get the Maple Leafs’ roster in proper shape in the coming weeks, a bank of phones sitting within arm’s reach on the general manager’s desk might be more appropriate.

When Dubas recently changed the photo on his Twitter profile to one of him holding a phone to each ear (taken during the 2019 National Hockey League draft in Vancouver), the GM seemed to playfully acknowledge the work that he has ahead of him.

Whether Dubas sets a foundation for coming transactions once the NHL gathers in Montreal this week for the 2022 draft, the first one held in-person in three years, what comes next will set the course for 2022-23.

With the Leafs holding the 25th pick in the draft and just two more selections in the later rounds, no one chosen by Toronto on Thursday or Friday will make an immediate impact.

Dubas and his staff need to figure out a way to replace not only the 21 goals and general energy supplied by Ilya Mikheyev last season, but what the speedy winger would have brought next season and beyond. It’s clear the Leafs won’t be able to afford what could be a Mikheyev price tag in the range of $5 million US a season (as silly as that may seem). Getting anything in return for Mikheyev’s rights, even a late-round draft pick, would be a bonus.

On the blue line, the biggest off-season goal is to re-sign restricted free agent Rasmus Sandin, who is in line for a bigger payday than what Timothy Liljegren received on his recent two-year contract (an average annual value of $1.4 million).

Once Sandin is resolved (assuming it is, considering talks have hit bumps), the Leafs will have seven NHL defencemen under contract, so Dubas is unlikely to be looking to add anything more than a depth piece or two.

In any event, keep us out of the group that thinks the best course of action would be to trade Sandin, the Leafs’ first-round pick in 2018. At 22, all of Sandin’s best days in the NHL are ahead of him. Trading that type of potential, especially when remembering it’s not a young Leafs defence corps as a whole, would make little sense.

Beyond the replacement of Mikheyev and the Sandin issue, the forward group (it will also be key for Dubas to re-sign RFAs Pierre Engvall and Ondrej Kase) and the defence corps appear to be set, more or less. Cheap depth pieces will be required up front, but nothing beyond those types of players would fit a tight Leafs budget.

If only there was enough cash in the Leafs’ chequing account to ensure that any goalie the Leafs acquire would be money in the bank. With approximately $6.4 million to spend, including on Engvall, Kase and Sandin, it’s difficult to comprehend how Dubas will make it work.

Moving Petr Mrazek and his $3.8 million AAV is a must.

Any of Darcy Kuemper, Ville Husso or Marc-Andre Fleury could be enough for the Leafs to finally skate into the second round and beyond. As of today, though, no goalie who could make a significant difference is affordable for the Leafs. That includes Jack Campbell, as much as he has loved his time in Toronto.

Does Dubas move Justin Holl, whose $2 million would come off the books? How about Alex Kerfoot and his cap hit of $3.5 million? If there are no takers for Mrazek, is Dubas forced into making move he would rather not?

Trade William Nylander, at his value? Not a chance.

So, yes, Dubas will continue to work the phones as he gets another shot at trying to turn the Leafs into a legitimate Stanley Cup contender, not a team that is once again left shrugging its shoulders after another first-round defeat.

If that happens again in the spring of 2023, we can’t see how Dubas would be entrusted to make another run at improving the team that summer.

Leafs Nation would be loathe to witness more disappointment some 10 months from now, on par with Lucy pulling away the football from Charlie Brown for the umpteenth time.

Dubas has no choice but to make the right calls in the coming days and weeks.